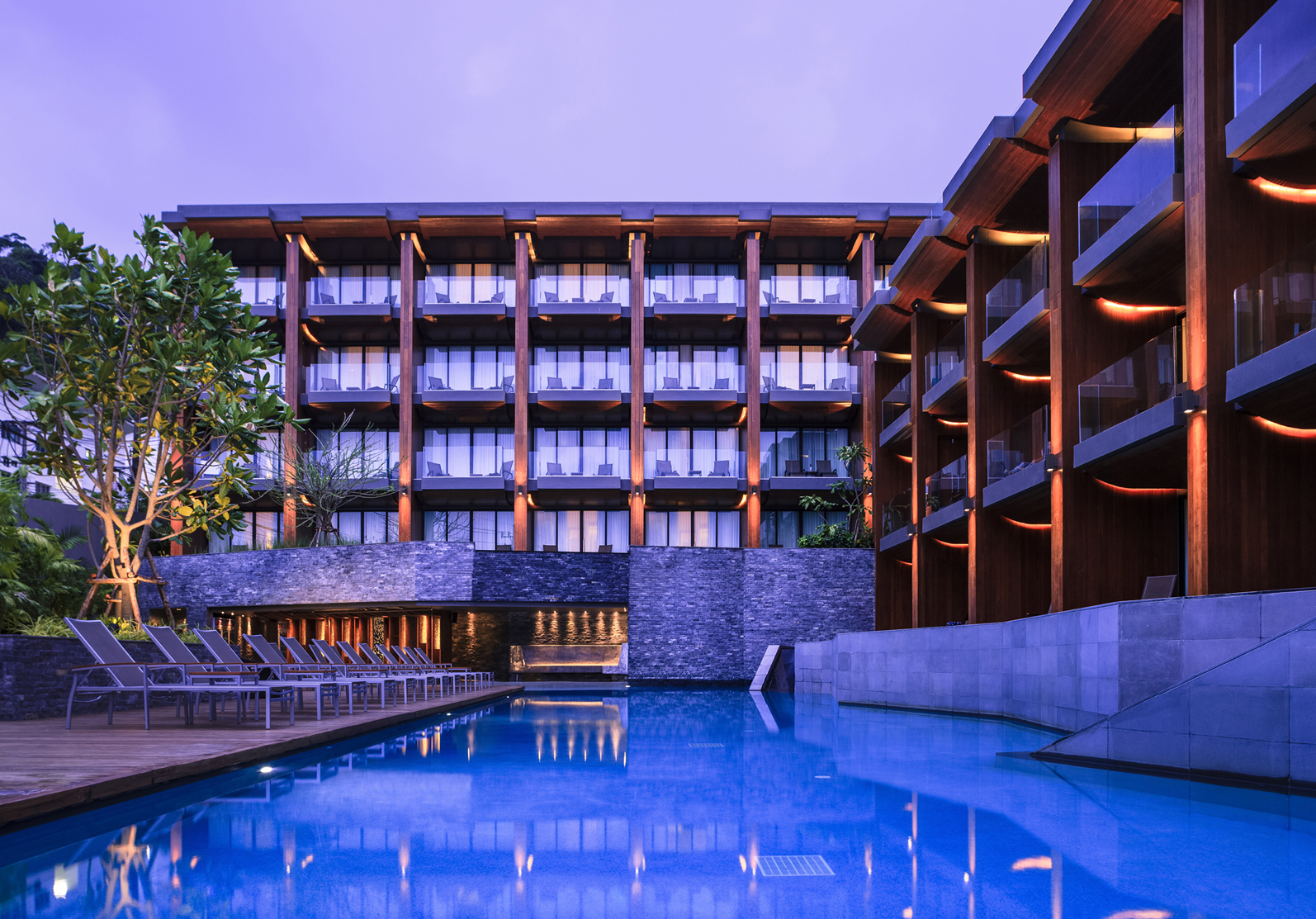 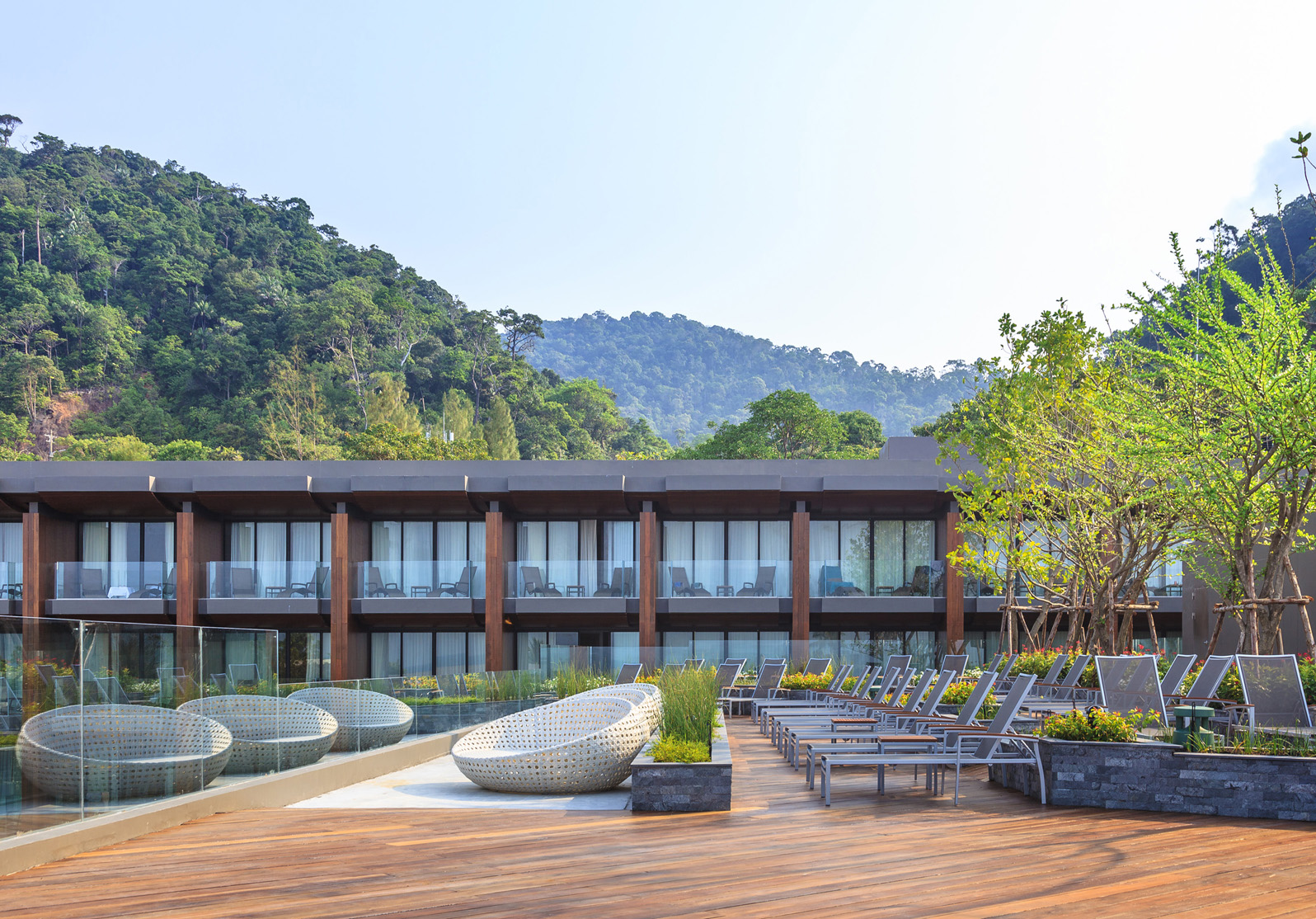 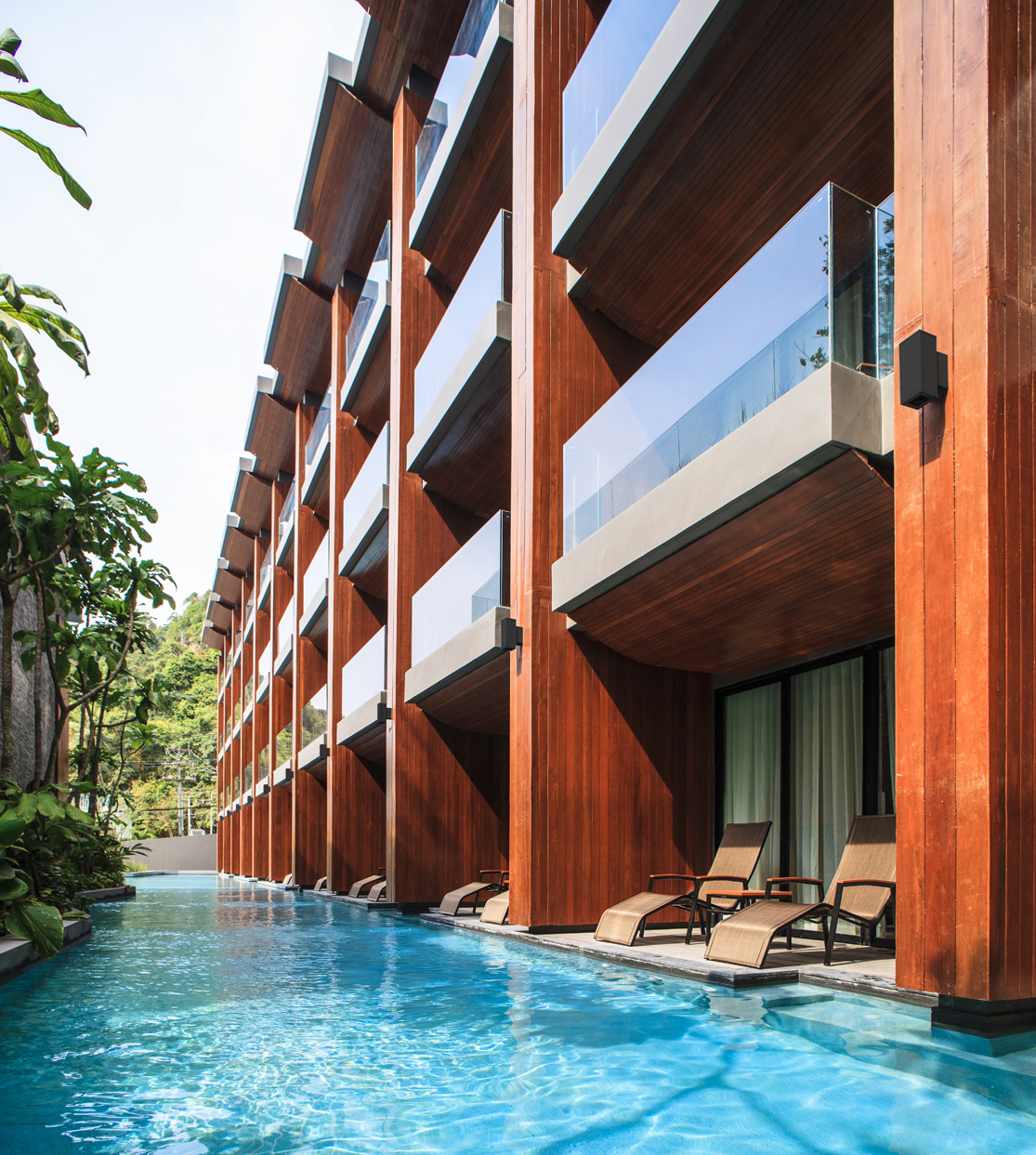 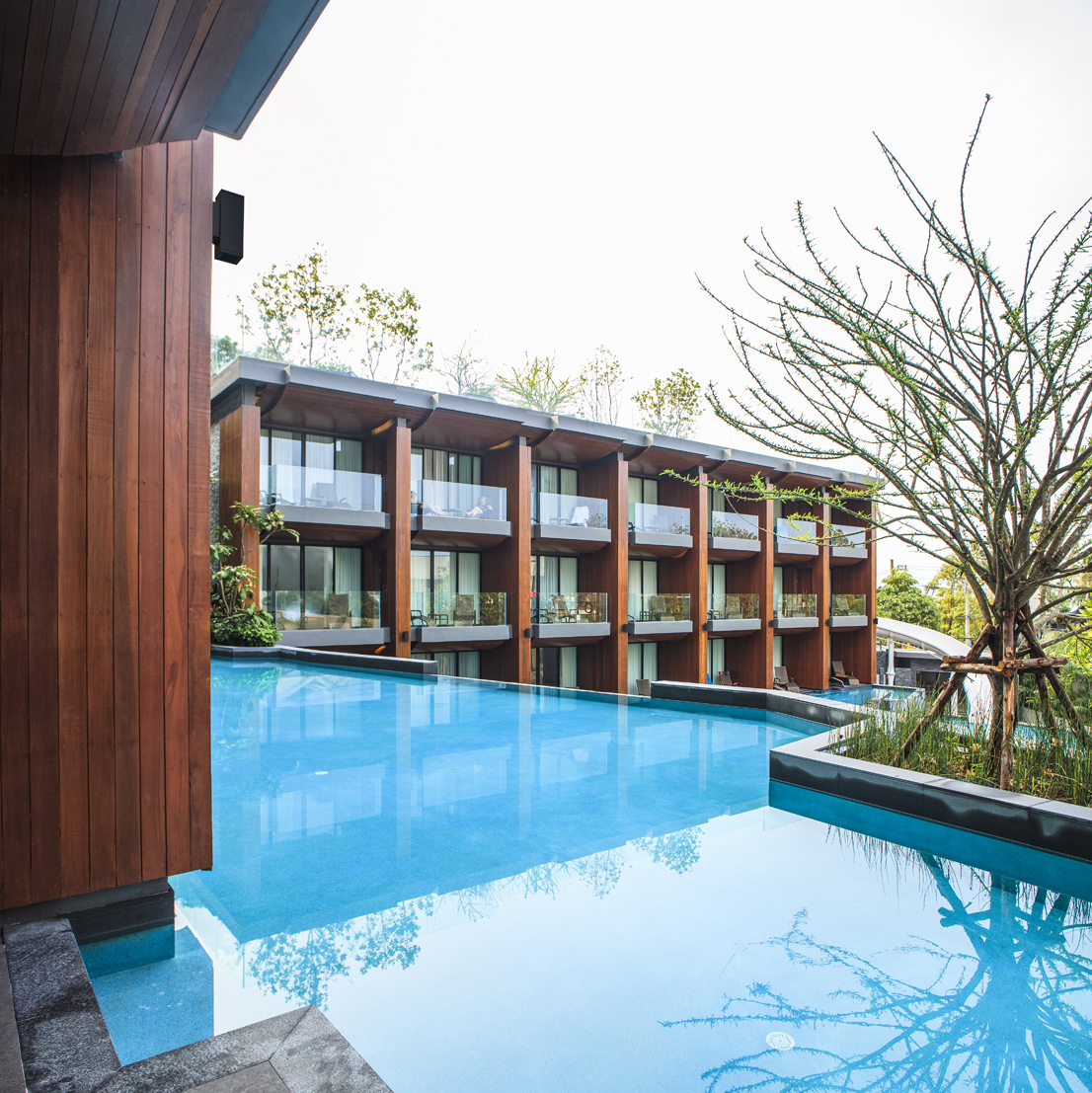 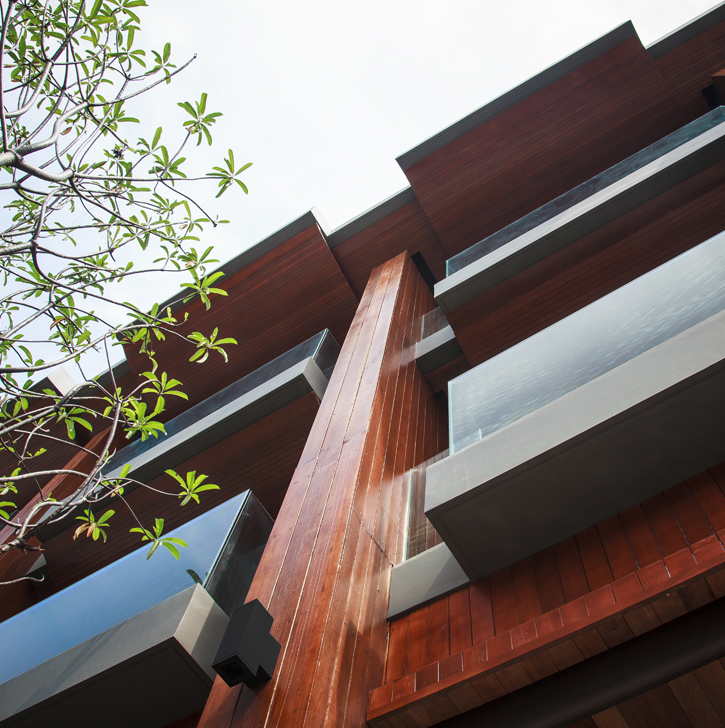 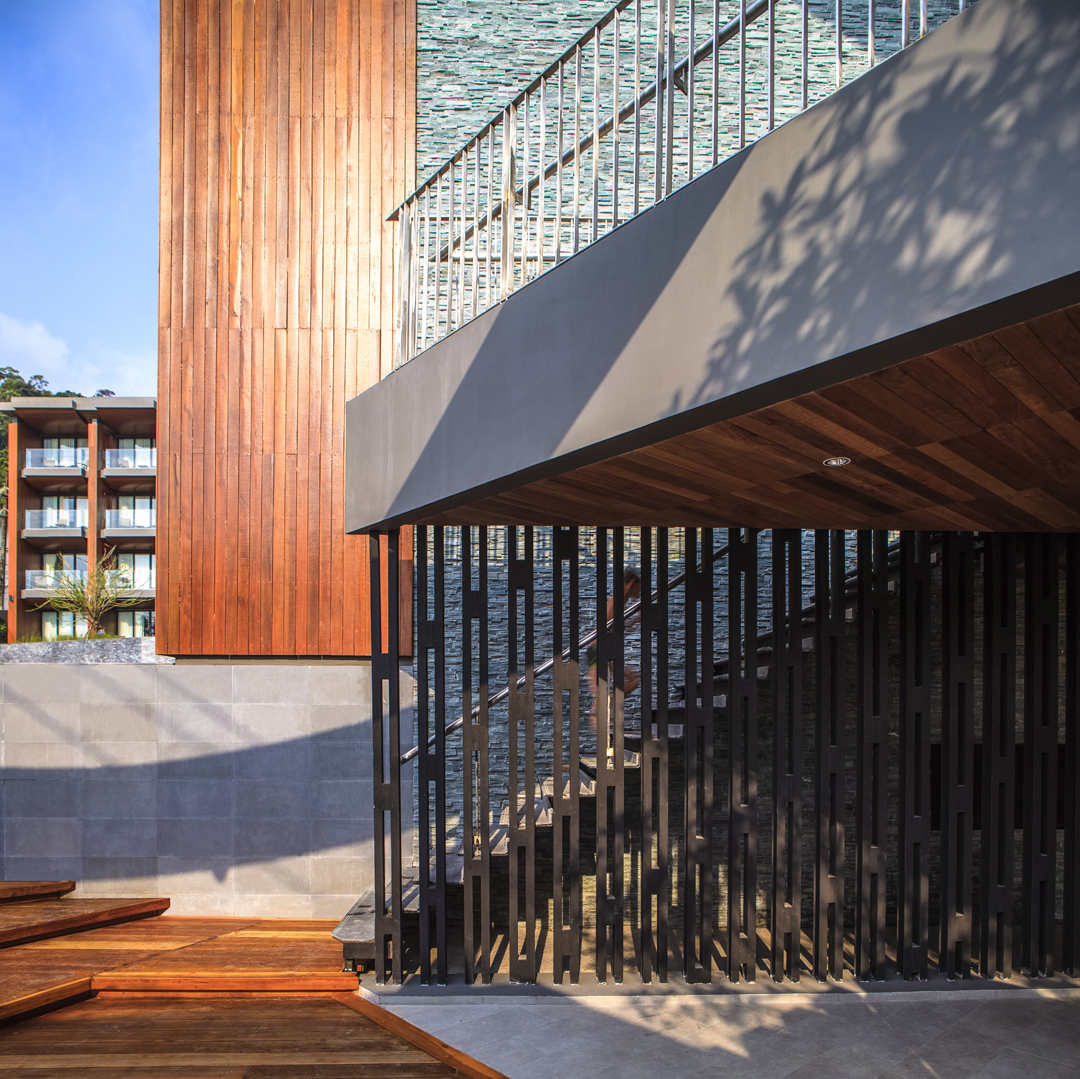 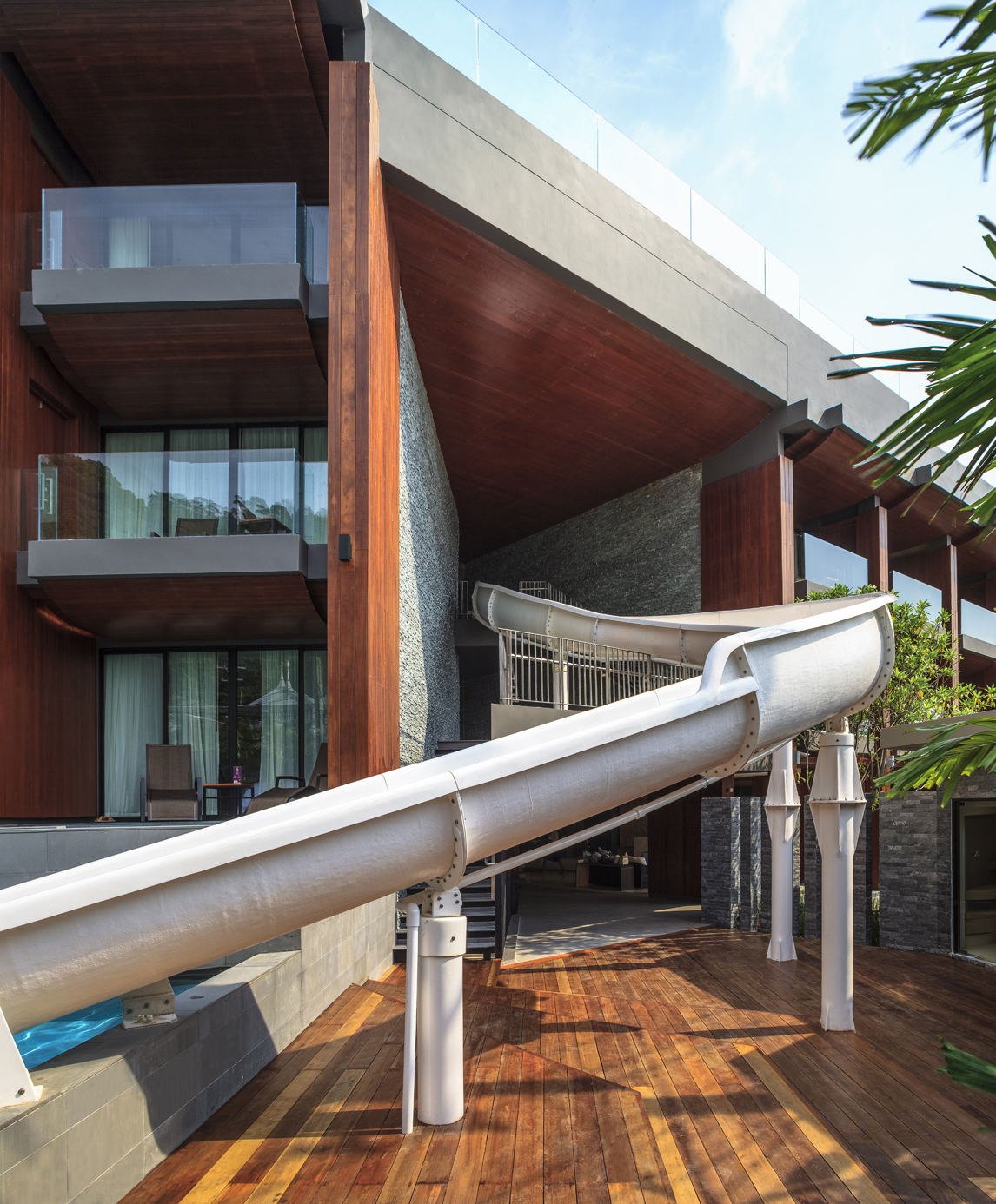 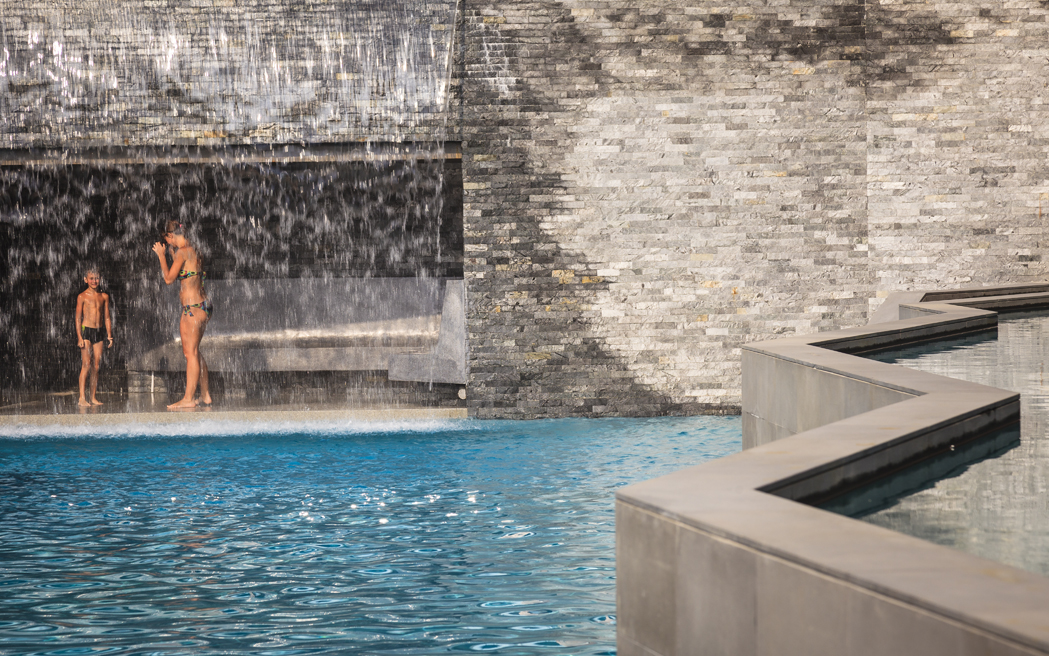 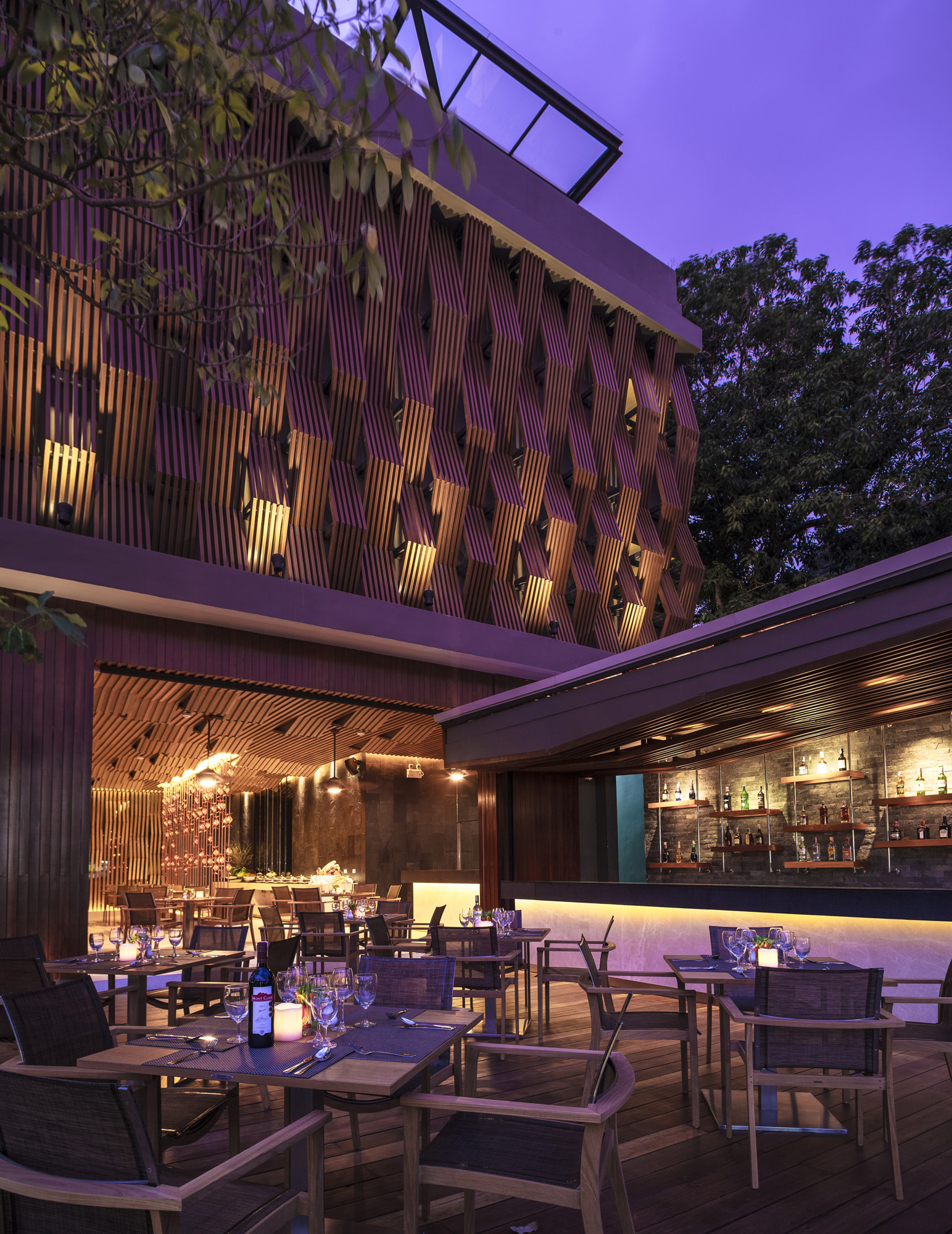 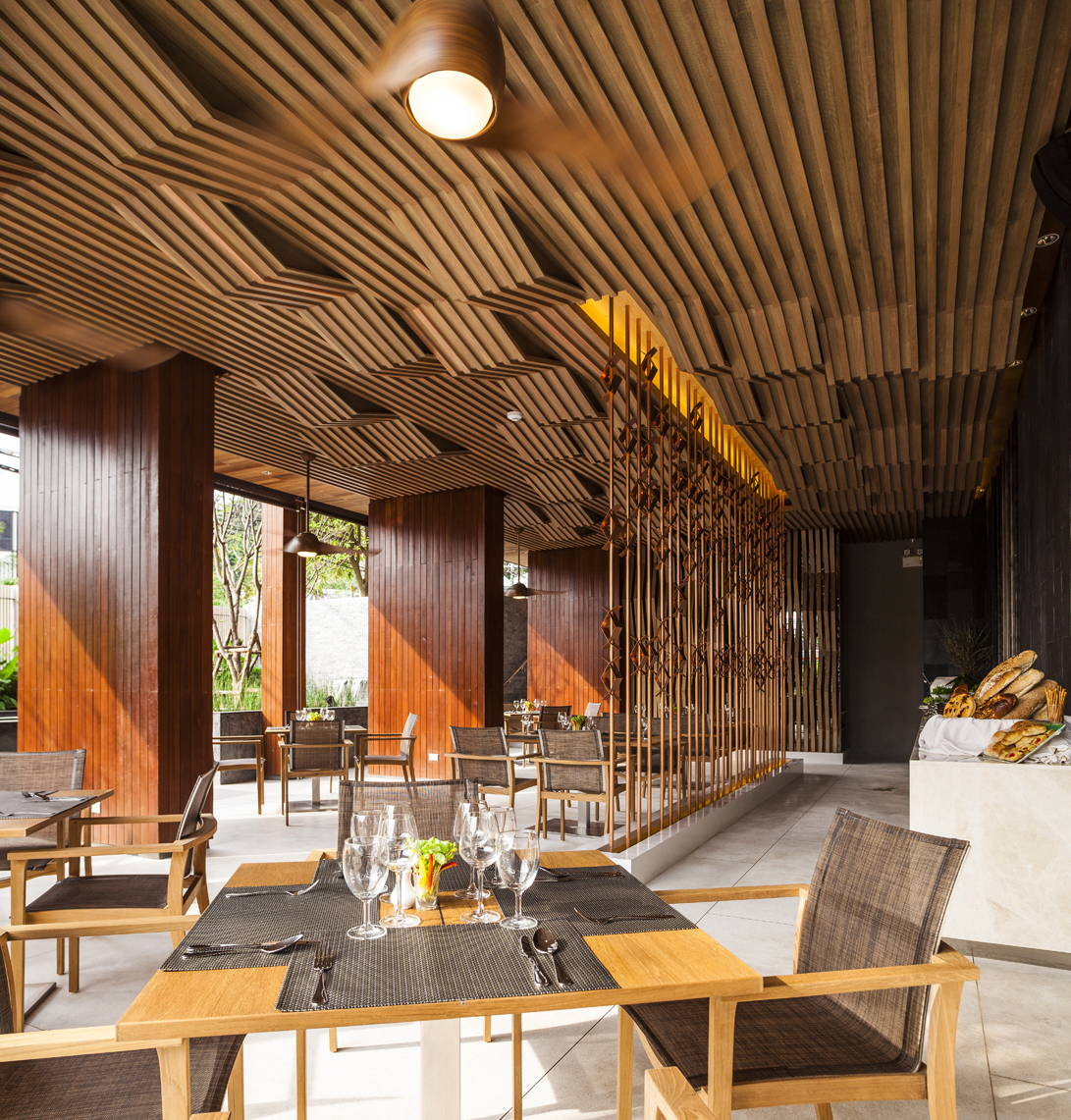 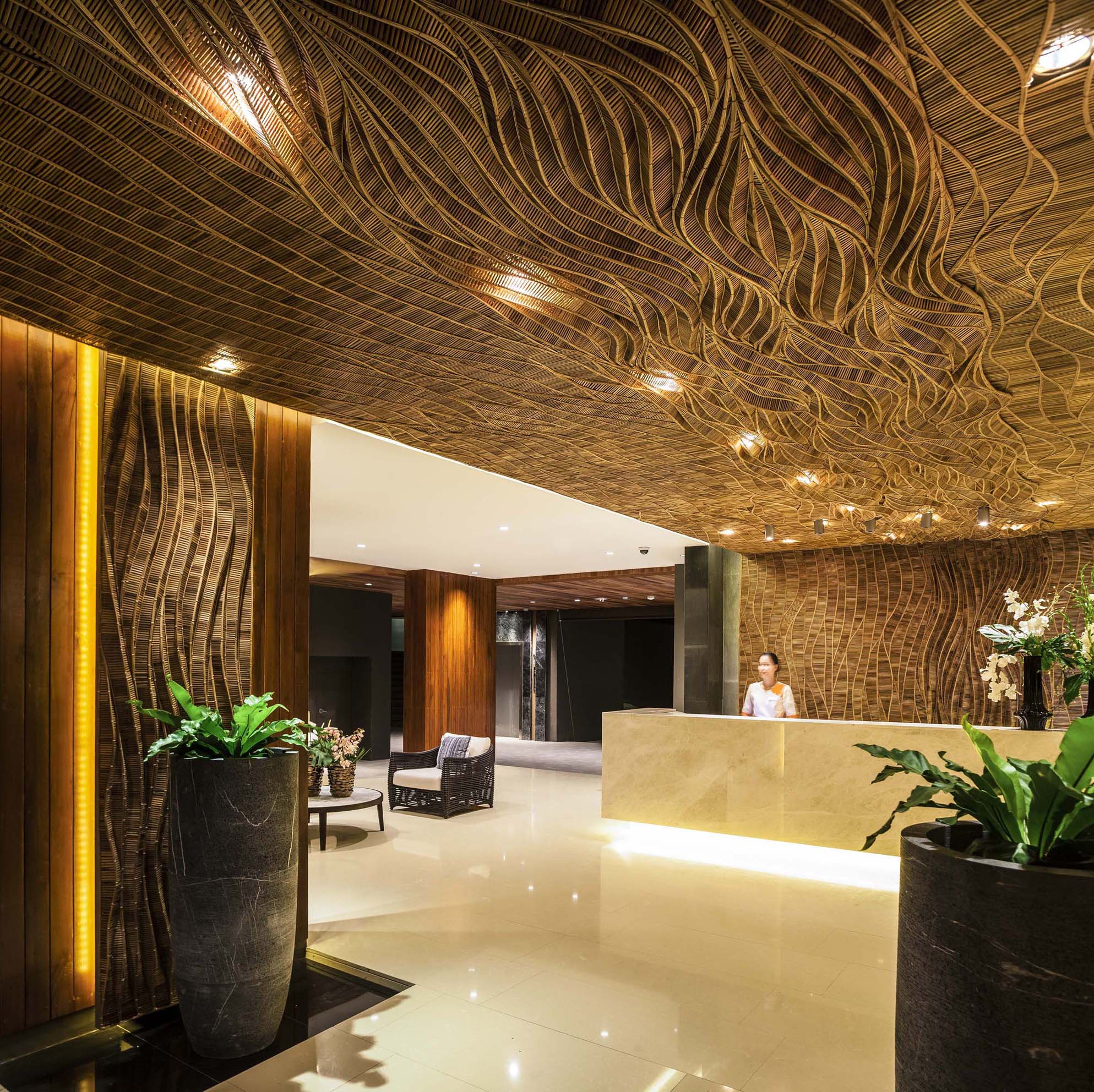 
In the recent years, the growing tourism market in the East coast of Thailand has resulted in even more developments in hotel and tourism-related businesses in the region. Chang Island in the province of Trad, one of the most popular beach cities among European and Asian holidaymakers, has also followed this trend steadily.

The existing KC Grande Resort & Spa, located on the most beautiful beach in the island : Had Sai Kao (White Sand Beach), has welcomed its guests in full capacity for the last couple years. To accommodate the increasing number of bookings in the near future, the new extension demands additional 79 keys with facilities including pools, a restaurant, bars and sun-bathing decks.

Situated at the corner of the inclined road that cuts the site into a triangular shape which is less than 100 meters away from the beachfront, KC Grande Resort & Spa New Extension faces two problematic challenges: how can the building fit in a triangular site with a steady inclination? And how can the guests feel like being part of the beachfront despite the fact that they are far-off?

By splitting the building into two parts in two different levels according to the existing topography, we optimise the internal space between the 5-metre different levels of the front and the back buildings while also strategically placing a 30m-long pool and a 3.5m-high artificial waterfall as a focal point in middle of the space. Behind the waterfall, a small cave is hidden and cladded wholly with slate stone, allowing guests to enjoy intimate space filled with freshness and relaxation.

On the first floor of both the lower and upper buildings, all guestrooms have direct access to the plunge pools of their own, representing the effect of being adjacent to the sea. Another advantage of locating the back building on top of the slope is that most of the guestrooms have clear view towards the sea, not being blocked by the lower building and other buildings in front.

At the connecting point of the two buildings, a giant slide is strategically placed from within the three-storey cave down to the main pool below. Regardless of age, guests’ experience is ecstatically diversified by letting their bodies down curvedly along the S-shape of the slide, leaving the water and speed carrying them to excitement. It is a joyful element of space and time that seamlessly ties architecture, landscape and context together.

On the rooftop level of the lower building, a 40m-long infinity-edge pool with a pool bar at the far end provides a unique experience of being at the seam line between the sky and the horizon overlooking towards Had Sai Khao Beach. On the other side, an expansive stepping roof garden is shaped as a series of sea cliff, providing all sunbeds with clear view to the sea.

The architectural elements, from the scale of the facade to the interior spaces of the project, are treated as the performing character of wooden weaving, a local craftsmanship. The interplay of light and shadow is subtlely articulated in various parts of the building.